They took 3 wins out of 3 nominations in the September competition. They even got finalists against… Themselves. Boy, that’s a way to be 100% certain to get the trophy !
We had to know more about this dark and sensitive duet… Here is the Black Mirror interview for the ATMA.

Hi, can you tell us more about Black Mirror : are you a band, where does the name come from… What’s your backstory ?

We are Inés Bonet and Arsenio Cavada from Spain. We started back  in 2014 when we met accidentally, and as a game we made several spontaneous covers of songs by artists that we admired. We did it during our free time, it was fun but soon we felt need to start composing our own songs, writing our emotions and turning them into music. The musical connection between us was surprising and ideas began to emerge immediately.

We started to share them on social networks (SoundCloud, Youtube, Hispasonic …) enjoying the simple fact of creating, sharing and interacting with other people.

We are indeed a band, but an unusual band, we almost don´t see each other´s face, our inspiration and work process has always been mediated by distance,

behind a computer screen, swapping files, so Black Mirror is the dark surface of a display accidentally turned off when we are in front of it, it reflects us and makes us think about our life.

You just won at the American Tracks Music Awards (September edition) and you set a new record : you got 3 wins out of 3 nominations win Best  Lyrics, Best Independent Artist and Best International Song. How does that feel ?

We are grateful and surprised. It is an honor for us. We never thought that we could be selected among so many artists, particularly in an international competition. There are fantastic artists all over the world, in the shade, we appreciate that many people share with us this music passion and that there is so much talent everywhere.

These types of competitions are a perfect way to give a chance to all those who are out of those habitual ways. 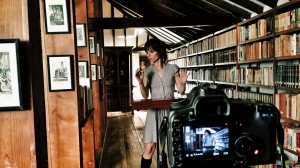 For that latest category (Best International Song) : you got finalist with Cloudy Day, competing against… Yourself, with another song “Satin Gloves”. This is a first in the ATMA history. You have to know the Judges votes for the tracks in an anonymous way. They noticed the same style and “brand” but you beat the competition. Are you used to that type of winning ?

In fact, it’s the first major prize we’ve won. It is really gratifying, also the fact that our own style is perceived in our music, that means that we are honest and coherent and that inevitably our music is impregnated with a unconscious own brand that is always printed in our songs.

How does your music come together ? What s your writing process, the way you compose ?

Black Mirror’s way of working is based on an individual work in our personal studios and exchange of digital files, which frequently include domestic noises, birds, dogs, crickets, etc. These imperfections make our music is, in addition to music, a capture of the circumstances that existed at that time, everything remains as it was, as a result of something that happened, a photo of the past.

Production goes hand in hand with composition in a linear additive work, a bidirectional input dialogue that lasts for a few days per track.  There is sometimes a real uncertainty about the end result, often unorthodox and unplanned, but that process produces unexpected fruits and it’s very gratifying artistically.

Cloudy Day, Half Life and My Innocence : are these tracks all part of the same album ?

Cloudy Day and Half Life are songs from our album “No colours for Concern”, in fact we never had intentions or expectations of publishing any album, but one day the record label from Tenerife “El Hombre Bala Records” proposed us to edit an album with a selection of our songs. It was a surprise too…

My innocence was a song we made after the release of the album, and we think it has a new level of maturity.

Where can people by your music ?

Our album can be purchased in Bandcamp, Amazon, iTunes, Spotify, Google Play, etc.

Our music can be listened on SoundCloud and Youtube too.

Your music has some melancholy in it, beautiful melodies but also an obvious dark side of some sort. What are your influences or references ?

Of eclectic musical tastes, our influences are various and include classical music, the British pop of the 60s, Symphonic and progressive Rock, the American Folk and more recently the music developed by bands like Massive Attack, Portishead, Depeche Mode, so also we are influenced by Trip Hop and electronic music, in a more aromatic than formal way.

Do you perform on stage ? Have your concerts schedules for the months to come ?

We are not a usual band, we don’t even re-interpret our songs once they are finished.

Our project is to continue having these moments of pleasure making music in the same way that until now, enjoying the process and without compromises that turn it into something unpleasant or overwhelming.

And here is the brand new video music of BLACK MIRROR : “Worms”, which is the first single from their new album.